‘TIR’ (Transports Internationaux Routiers or International Road Transport) is an international transit system based on a UN Convention implemented at a global level in a Public-Private Partnership. The TIR System has been facilitating and securing trade and international road transport for over 60 years, by allowing customs-sealed vehicles and freight containers to transit countries without border checks.

Pakistan became a member of the TIR (International Road Transport) Convention in 2017 which has 77 contracting parties including China, Afghanistan, Iran, Turkey, and all Central Asian Republics (CARs). After becoming a member, Pakistan notified the following sea and land border points as TIR crossings:

The 5 pillars of the TIR system 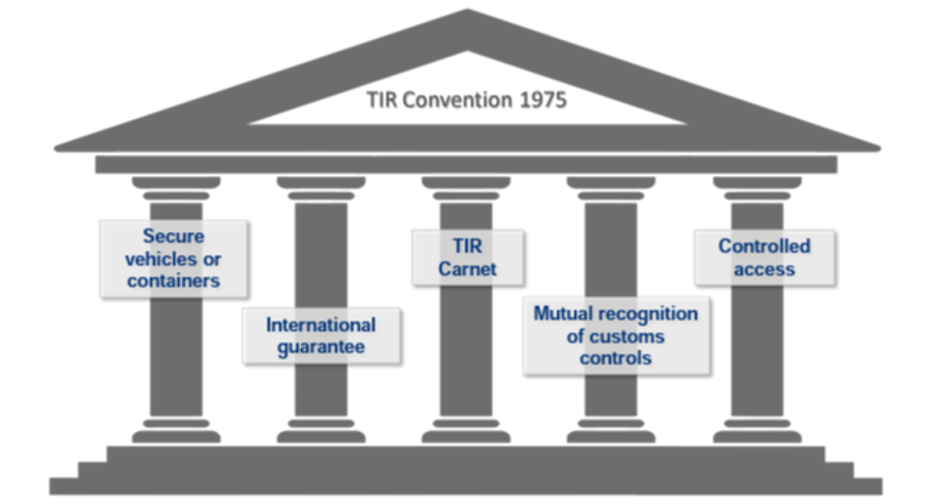 Overview of Annex 11 of the Convention

The United States Agency for International Development (USAID), in collaboration with TCS Logistics (Pakistan), successfully launched the first pilot shipment to Central Asia under the Transports Internationaux Routiers (TIR) Convention, a customs agreement that facilitates the international transport of goods. The trial shipment cargo, consisting of herbal medicines destined for Uzbekistan, departed Karachi on April 29, 2021 and arrived in Tashkent on May 4, 2021 via the Karachi-Kabul-Termez route.

Pakistan Customs processed the first-ever TIR consignment from Karachi at Torkham destined for Tashkent via Afghanistan. The consignment consisted of herbal medicines and after completion of all Customs formalities at Torkham it crossed into Afghanistan.

Moreover, it provides additional route from Coastal areas of Balochistan and Sindh to Iran and Turkey & Azerbaijan in addition to already available route of Taftan-Mirjaveh (Iran). Recently, all stakeholders have focused on the development of a TIR regime and TIR operations have gained momentum. In May 2021, one Pakistani vehicle took herbal medicines to Uzbekistan under TIR. While three vehicles, two from Turkmenistan and one Uzbekistan, brought grey Fabric and cattle hides respectively under TIR. On their return, these vehicles transported back sports goods from Pakistan.

Through an amendment with regards to the TIR Carnet rules, now the requirement for admission for local companies is reduced to one truck from five, while for joint ventures, the threshold is now five trucks instead of ten. Similarly, previously bank guarantees had separate costs which are now converted into insurance guarantees. The inspection process has been made stricter with the involvement of ICC-PNC, Ministry of Communications, and Motorway Police. The process is gaining traction and a few companies have already received their Carnets while others are to receive them soon.

Pointing to a huge potential boost to Pakistani fresh fruit and vegetable trade with Russia, the TIR journey cut transit time by up to 76% in comparison to the traditional sea route.

The truck, carrying fresh mangoes, travelled from Pakistan to Russia via Iran and Azerbaijan, delivering the goods to Moscow in seven days. Conducted jointly by Pakistani and Iranian logistic and transport operators, it demonstrated the first seamless transport from Pakistan to Russia along the International North-South Transport Corridor (INSTC).

With the traditional sea route taking 25 to 40 days, transport has successfully demonstrated huge time savings. TIR transports can now reach Istanbul from Pakistan in as little as six days, with highly secure and speedy border crossings, reducing risk as well as costs and time.

With the significant trade potential of the ECO region, this new corridor will enhance connectivity and set a milestone for transit facilitation, enabling further regional integration and more efficient access to global markets.